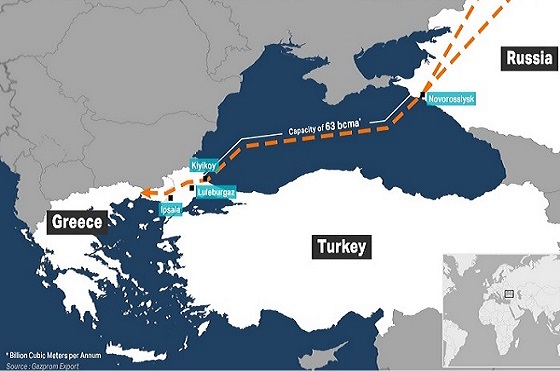 Moscow has suspended construction works on the Turkish Stream pipeline, the proposed natural gas pipeline from the Russian Federation to Turkey across the Black Sea. The proposal to build the pipeline, which was initially meant to replace the cancelled South Stream project, was announced by Russian president Vladimir Putin on 1 December 2014, during his state visit to Turkey. Alexander Novak, Russia’s Energy Minister, however, recently confirmed that the negotiations “have been suspended”.

The talks already faced its share of problems since Vladimir Putin had proposed to construct the pipeline for the first time but the tensions skyrocketed after Turkey had shot down a Russian jet. For example, earlier in October this year, Gazprom, Russia’s energy giant, said that it would halve the amount of gas that was supposed to be transported by the pipeline so that more crude could be funneled through another pipeline that does not go through Turkey. The original plan for the pipeline was to transport 63 billion cubic meters of gas every year – 16 billion to Turkey and 47 billion to the Turkey-Greece border.

Moscow has also suspended the work of a Russian-Turkish Commission on Trade and Economic Cooperation, which had been in charge of the agreement on the pipeline for both countries. The Russian government said that the talks were on hold “due to the political situation in Turkey where the cabinet of ministers was being appointed at the moment”. Moscow did not provide any other further details. The Russian leadership moreover accused the Turkish military of protecting ISIS, thus allowing it to act “boldly and blatantly”. Russian Deputy Defense Minister, Anatoly Antonov, also said that Turkey was buying oil illegally from the terrorists. Yet, despite the suspension, Russia has not completely cut ties with Turkey over the project. Alexander Miller, Gazprom’s CEO, said that if Ankara changes its mind and wants to work on the pipeline, it “should first of all turn to Russia”.