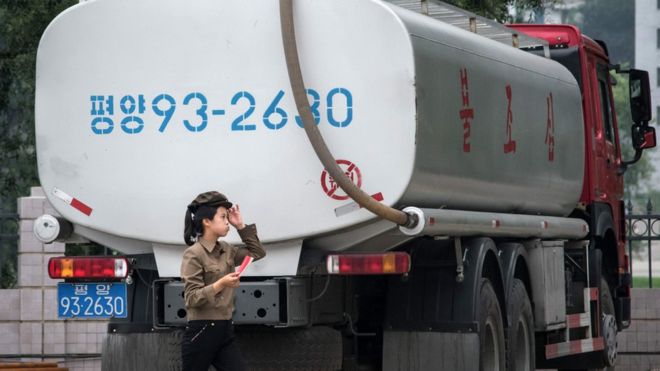 China has decided to curb its oil exports to North Korea on top of stopping its textiles imports from the rogue country. China’s oil exports are North Korea’s main source of petroleum products. The move comes in response to the nuclear tests earlier this month when the regime fired its second missile in many months over northern Japan into the Pacific Ocean. Beijing commented that the new restrictions on refined petroleum would apply starting 1 October and on LNG immediately.

The United Nations has likewise introduced fresh sanctions, also targeting oil and textiles. Under the new rules, China’s oil exports to North Korea would be capped at a maximum of two million barrels of refined petroleum to North Korea annually starting in January 2018. Pyongyang is estimated to have bought 6,000 barrels of refined petroleum daily from China last year – the equivalent of almost 2.2 million in total for the entire year. Beijing has not published any data on oil exports since 2014.

China and Russia had initially been against a proposal from the US to put a complete ban on oil exports, but later agreed to the reduced measures. North Korea does not have much domestic energy production but has a capability to refine some petroleum products from crude oil that it buys abroad, which is not included in the new ban. In the past two months, petrol prices have gone up by 20% in the country and they are poised to rise in the future. Analysts predict that North Korea might have up to 60 nuclear weapons on top of cyber warfare capabilities, a biological weapons research program and a chemical weapons stockpile. It also retains a vast array of conventional artillery aimed at South Korea.