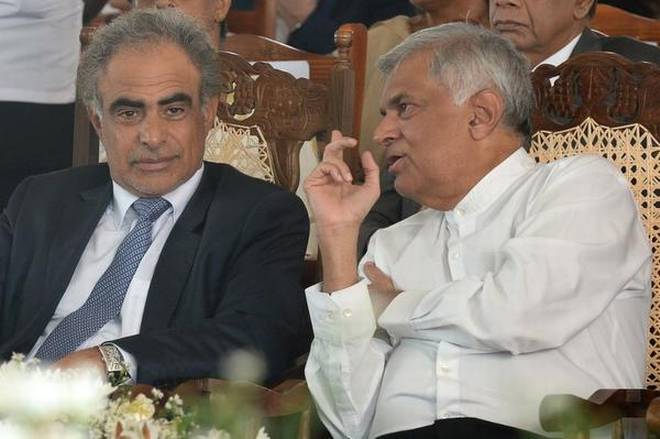 Oman’s oil minister said over the weekend that he was excited about his country taking part in a Sri Lanka oil refinery project in a sign that plans to the sultanate’s involvement may become a reality in the end. Sri Lanka said last week that the Oman Oil Corporation had clarified it was interested in taking a 30 percent stake in the new refiner on Sri Lanka’s south coast. However, Omani officials denied the involvement.

Oman’s current Minister of Oil and Gas, Dr Mohammed bin Hamad Al Rumhi, joined Sri Lankan Prime Minister Ranil Wickremesinghe at the laying of the foundation stone for the planned $3.85 billion oil refinery at Hambantota on the south coast of the country, which is poised to become Oman’s biggest foreign direct investment to date.  “This is not a project just for three years. This is a life long project,” Mr. Rumhy said at the launch ceremony held at the Mirijjawala investment zone in Hambantota. “We will work very hard to deliver this project to the people of Sri Lanka.” However, he did not provide further comments on whether Oman was planning to have a direct stake in the refinery.

The refinery will be built close to a $1.4 billion port that is run by China Merchant Port Holdings. The majority of the refinery project is financed by India-based Accord Group through a Singapore entity. The project will be Sri Lanka’s first new refinery in more than half a century after Iran constructed a 50,000 barrel-per-day refinery close to the Sri Lankan capital of Colombo to blend Iran’s light oils. The new facility will export all products that it will refine. “We have Chinese investment, we have Indian investments, we have Oman interest for investment, and we have investment interest from many other countries,” Mr. Wickremesinghe said at the event. “It shows that Hambantota will become the multinational investment zone.”