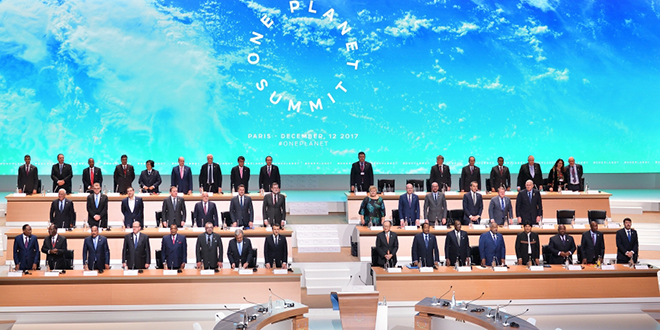 The French President Emmanuel Macron, the President of the World Bank Jim Yong Kim and the Secretary-General of the United Nations, Antonio Guterres, convened on 12December 12, 2017 the One Planet Summit on the public and private finance in support of climate action. The meeting aimed to address the environmental, ecological and climate emergencies for the Earth by calling together in Paris international leaders and philanthropists from around the world.

The One Planet Summit was organized on the occasion of the second anniversary of the historic Paris Agreement as a call for a concrete action. Adaptation, mitigation and mobilization are the three key words of the summit, each promoted by one of the three organizers. The aim is to find new means of financing the adaptation of our ways of life to inevitable transformations, ensuring climate issues are central to the financial sector and speeding up the reduction of greenhouse gas emissions.

The summit is centered on finance, which is seen as the crux of the matter. The development of green finance used to be one of the pillars of COP21 – the 2015 United Nations Climate Conference.  Finance is considered the basis for all action and the assurance of implementation of concrete projects. The leaders also seek to balance the solidarity with the countries that suffer the most from environmental changes and at the same time redirect billions towards low-carbon investments to reach the 1.5/2°C goal.

The organizers of the summit decided not to invite US President Donald Trump after he had announced to withdraw the United States from the Paris Accord deal. However, the United States are represented by California Governor Jerry Brown, former NYC Mayor Michael Bloomberg and former Secretary of State John Kerry. Arnold Schwarzenegger, former California governor, who is also attending the summit, was quoted as saying that it does not really matter whether Donald Trump is on board with the deal or not, “because companies, scientists and other governments can ‘pick up the slack’ to reduce global emissions.”