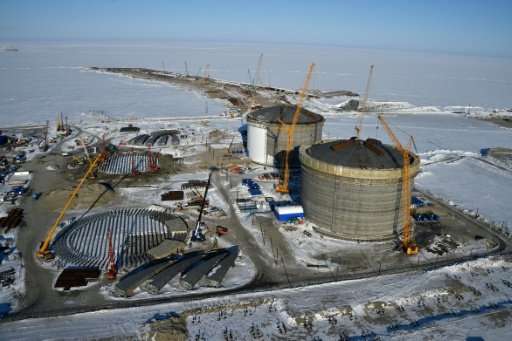 Russia has launched a giant Arctic gas project in its efforts to bypass Western sanctions and boost ties with China. The $27 billion Yamal LNG facility last week loaded its first tanker with liquefied natural gas coming from an Arctic peninsula meant for the Asian consumers. The project initially struggled to secure financing from China that did not violate US sanctions on Russia over Crimea.

Yamal is a landmark project marking a departure for Russian gas exports, which have been so far centered around state-run Gazprom shipping fuel via pipeline to Europe. Russian President Vladimir Putin granted special permission to export gas to Yamal, which will use ice-breaking vessels to transport LNG along the coast of Siberia during summer to secure deliveries to the Asian markets. Mr. Putin said that the significance of the project went beyond Russia’s energy sector, saying that it would “open up the Arctic and the Northern Sea Route.”

The project is co-owned by Russian natural gas firm PAO Novatek, France’s Total SA, China National Petroleum Corp. and a Chinese state investment fund. Novatek is Russia’s second largest energy company and the United States barred it from rising financing in US dollars for the project in 2014 as part of sanctions on Russia, thus encouraging Moscow to look for money in China.

Eventually, $12 billion in loans were secured from two Chinese state banks as part of Beijing’s flurry into large Russian energy projects. Yamal was also helped by huge tax breaks and state infrastructure spending, thus leading to low production costs and benefits from freezing Arctic temperatures that help the cooling of the gas to turn it into liquid. There are also plans to set up a second Arctic LNG plant nearby.