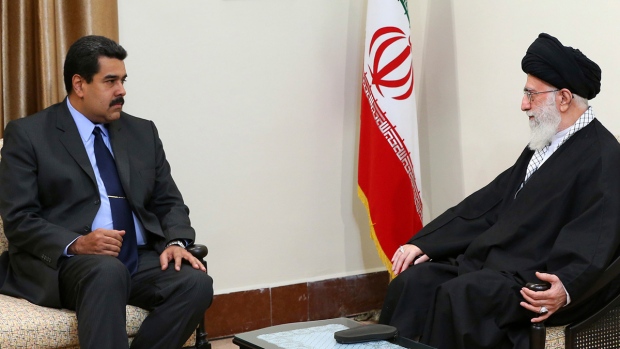 Iran’s leader Ayatollah Ali Khamenei confirmed during his meeting with Venezuela’s president on Saturday (10 January) that he supported the cooperation of both countries to reverse a quick fall in global oil prices which Teheran described as a “political ploy hatched by common enemies”. Venezuela’s President Nicholas Maduro is currently on a tour of OPEC countries trying to lobby for higher prices, which were only at $50 per barrel last week. The fall in energy prices has undermined the economies and mainly public finances of both Iran and Venezuela, which are heavily dependent on oil.

When speaking to President Maduro, Mr Khamenei said that “the strange drop in oil price in such a short time is a political ploy and unrelated to the market.” In his opinion, Venezuela’s and Teheran’s common foes “are using oil as a political ploy and they definitely have a role in this severe fall in prices”. The official source concluded that both sides endorsed an agreement “for a coordinated campaign against the slide in oil prices”.

As a result of plummeting oil price, the Venezuelan economy has contracted already in the first three months of last year when its international reserves have substantially deteriorated. The fall triggered concerns that Caracas might default on the country’s foreign bonds, which has in turn pushed its bond yields to the highest level of any emerging economy. To dispel rumours, President Maduro denied that his country would default. As part of the struggle to avoid a possible default, Venezuela has started to cooperate with Iran with the aim to stabilize prices “at a reasonable level in 2015”, Iranian President Hassan Rouhani said.

Iran, like Venezuela, has also been harshly affected by falling oil prices, which has further taken a heavy toll on the economy already hit by global sanctions. Teheran has been particularly unhappy about the lack of coordinated action by OPEC countries to decrease production and ease the oversupply in the oil market in order to push up its price.