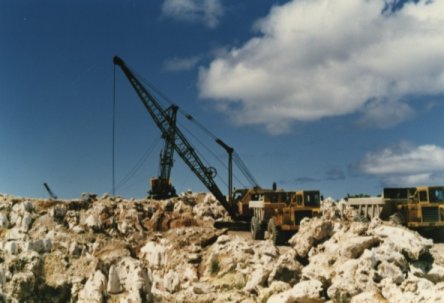 The Republic of Nauru is one of the most interesting Islands in the South Pacific. Its economy depends heavily on phosphate which is the only resource in the island.
Nauru produces annually 2 million tons of phosphate and exports the majority of it as a fertilizer to Australia, New Zealand, Japan and South Korea.
The type of phosphate found in Nauru and in a few other nearby Pacific islands, is a combination of limestone and guano. It is part of a larger grouping called phosphate rock.
The majority of phosphate rock can be found in large beds of marine sedimentary rocks. However, after decades of phosphate mining, 90pc of the island mineral resources have been depleted. The life span of the industry is estimated between five and ten years.
In anticipation of the end of the mining operations, the Nauruan Government has invested part of its revenue in several long-term trust funds. The Nauruans also own some properties around the world, including, hotels and golf courses in Australia, Hawaii and Guam.
But their savings have declined in recent years due to bad investment decisions and borrowings from successive governments to fund socioeconomic development projects and fill up budget deficits.