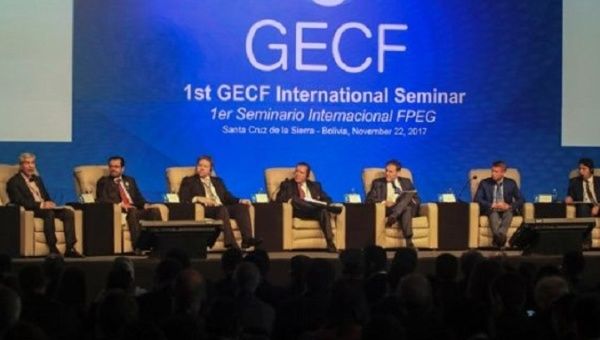 The Bolivian government signed natural gas development contracts with Spain’s Repsol, Brazil’s Petrobras, Royal Dutch Shell and Pan American Energy earlier this week. Covering blocks in the Iniguazu, San Telmo Norte and Astillero gas areas, the deals are poised to attract $1.6 billion in investment and boost production. Repsol, Shell and Pan American Energy will take part in the Iniguazu consortium, while Petrobras will participate in the other two. Several units of Bolivia’s state-run YPFB will be partnering in all the projects. “We are very confident and we have hope,” Bolivia President Evo Morales said during the signing ceremony at the Gas Exporting Countries Forum (GECF) in Santa Cruz. “We are committed to secure transparent contracts.”

Bolivia’s falling gas output is seen by observers as a major obstacle preventing an increase in exports to key customers in Argentina and Brazil. The country finished last year with reserves of 0.3 trillion cubic meters, the same as previous year, and output of 19.7 billion cubic meters, a drop of 3 percent, according to British Petroleum. President Morales commented that the projects with international partners could boost output by about 21 million cubic feet per day, with early production coming on line as early as 2020 or 2021.

Repsol CEO Antonio Brufau told the audience at the ceremony that he expected the Iniguazu project to succeed because “as there is existing infrastructure (near Iniguazu), if the exploration phase succeeds, we will be able to supply gas to the market very fast.” President Morales said he expected that the project would bring in $900 million of investments. In 2016 Repsol, Shell, Pan American and YPFB prolonged a previous deal to produce gas at the Capipendi fields until 2046, involving a $980 million investment. The associated output is about 8.6 million cubic meters per day of gas.