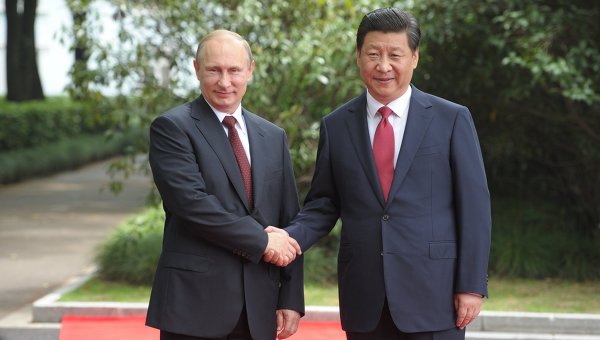 Russian President Vladimir Putin began a two-day official visit to China yesterday, which should give rise to a major gas deal between the two countries. It is the first official visit of the Russian President since China’s President Xi Jinping took office. Vladimir Putin said that China was a reliable friend and a major trade partner of his country. Although both Presidents did not manage to agree on a final price for the Russian gas yesterday, experts think that an agreement could still be finalized before the end of the high-profile visit. China is Russia’s the single largest trading partner with mutual trade flows of having been about 90 billion USD last year. Both countries are planning to double this amount up to 200 billion USD by the end of 2020. Expectations are fairly high that Russia and China would end up the negotiations with a contract of Russia’s Gazprom supplying the China National Petroleum Corp (CNPC).
The state visit of the Russian President is taking place while China is hosting an important summit of Asian countries in Shanghai. The event includes almost 40 representatives of states and international organizations. UN Secretary-general, Ban Ki Moon, could not attend but the leaders of important international players, like Pakistan or Iran, are attending. Chinese President Xi is expected to address some of security concerns facing the Asian continent during the summit. For its part, China has also gathered some criticism for its refusal to move an oil rig stationed in the South China Sea, Vietnam claims. Last week, Hanoi held demonstrations targeting Chinese-owned factories and their workers. Protests claimed at least two lives.