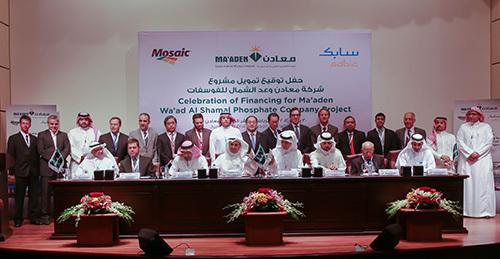 Saudi Arabian Mining Company, Ma’aden, has signed a $5 billion financing deal with several banks and a state-owned investment fund to support its $7.5 billion phosphate production project in the Saudi kingdom.
The project to be built in the northern city of Waad al-Shamal is a joint venture between Ma’aden, Saudi Basic Industries Corp and Mosaic and is part of Saudi Arabia efforts to diversify its economy heavily dependent on the lucrative oil refining and export.
This mining project is expected to produce 16 million tonnes per year of phosphate concentrate, sulphuric acid, phosphoric acid, calcium monophosphate and calcium diphosphat.
The phosphate production is scheduled to start in late 2016. A total of 16 Saudi and international commercial banks, including Al Rajhi Bank, Bank of Tokyo-Mitsubishi and BNP Paribas, as well as three export credit agencies and the Public Investment Fund (PIF) are supporting this project which will enable Saudi Arabia set foot in global fertiliser market.
The Waad Al Shamal project, to be located near the town of Turaif, close to the border with Jordan, includes the building of an industrial city and a phosphate complex, connected to the international markets by rail and a port, besides a nearby extensive Al Khabra phosphate deposits.
Among the contracts sealed were agreements for the construction of roads and rail lines, a water treatment plant and other utilities, several infrastructures and housing units.