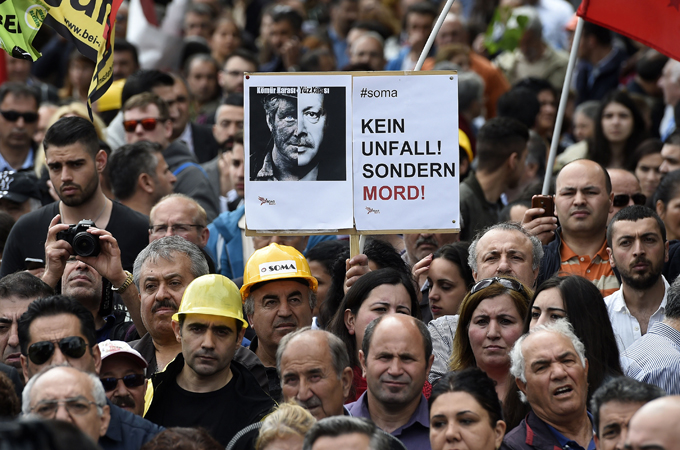 Last month’s mining tragedy in western Turkey that killed more than 280 people pointed out the corrupted mining safety not only in Turkey but throughout the emerging market countries. The mourning for Turkish victims was mixed with riots and angry demonstrations triggered off by Turkey’s growing demand for coal energy which had likely contributed to the growing rate of fatal incidents in the mining industry. Many critics claimed that the lethal blast had demonstrated how aggressive drilling for coal had become and the crucial role that Recep Tayyip Erdogan’s government had played in making mining perilous for workers.
Largely as a result of the Turkish tragedy, investors in the mining industry are slowly losing confidence in cost controls, commodity prices, and return on capital. On the top of these troubles, the whole industry has been lately outperformed by equity markets as mining stocks and shares had already fallen by almost a fifth in the first quarter of 2013. In a struggle to rebuild the position of mining in the global markets, hurdle rates are being raised, non-core assets offloaded, and capital expenditures being scaled back. Slowly, but surely, the industry is now moving from maximizing value by increasing volumes of production to maximizing returns on existing operations from enhanced efficiencies and productivity.
Regaining confidence of investors, however, relies on the way the industry will be able to tackle increasing costs and volatility of commodity prices that have slowly become an omnipotent problem. Yet, mining is facing a great many other challenges ranging from financing capital projects, mining transactions, and industry consolidation through operational effectiveness, improving performance and risk management compliance, sustainability issues, and recruitment of skilled force. Despite all these obstacles, it is high time to demonstrate that the industry has the potential to succeed in both good and bad times, and retain its position of a healthy industry in the coming years.
Prior to the 2008 economic crisis, financing capital projects was not really an issue. The only challenge was to find the suitable capital structure within a setting of healthy operational cash flows. However, since 2008, the ability of companies to self-finance has been steeply decreasing mainly due to the volatile commodity prices. At present, mining businesses are dealing with very disruptive mid-term and long-term conditions. The focus should therefore be put on building higher levels of flexibility into projects including contractual terms and suppliers so that programs can react quickly to changing environment and conditions in global markets. Moreover, updating budgets in execution and capital program governance framework should also become a routine.
Naturally, enhanced profitability is, just like everywhere else, among the most wanted goals of the mining industry as well. The challenge here is to tackle cyclicality of commodity prices as well as demand which makes operating a proficient and streamlined business together with squeezed costs crucial. Thus, increasing internal efficiencies would likely be a key approach to dealing with competitors. The profitability of the business is strongly connected to risk management as well. This does not include only physical challenges to mining like the blasts in the Turkish mines but also dealing with buoyant M&A activity. M&A – mergers and acquisitions – have greatly contributed to the overall instability of the industry despite their alleged positive impact on the industry’s long term growth and production synergies through scale. M&A are also believed to efficiently handle protracted exploration costs, although partly impair sustainability of mining.
Sustainable practices by mining companies have the power to leave a legacy of positive impact long after the life cycle of a mine has ended. Indeed, leading mining companies have started implementing a variety of “green” measures to their everyday lives through the active management of their risks, maximization of positive impact of their operations, and mainly the embracement of an increasing number of international regulations and standards. Yet, country risk assessments, stakeholder engagement (environmentalists, NGOs, analysts), sustainability of strategy development or certification remain to be the main challenges for the international community and its requirements for a safer mining.
This list of mining challenges is by far not exhaustive. It will take a lot of work to prevent further tragedies like the one in Turkey from occurring. It will, however, take a lot of work not only in the business approach of mining companies themselves but also in the agendas of the governments of emerging countries, which are often pushing for the competitive edge so relentlessly that they – willingly or not – endanger the lives of their own people. Let’s hope that the tragedy in Soma will be a warning sign – and a point of departure – for all the stakeholders in the mining industry.