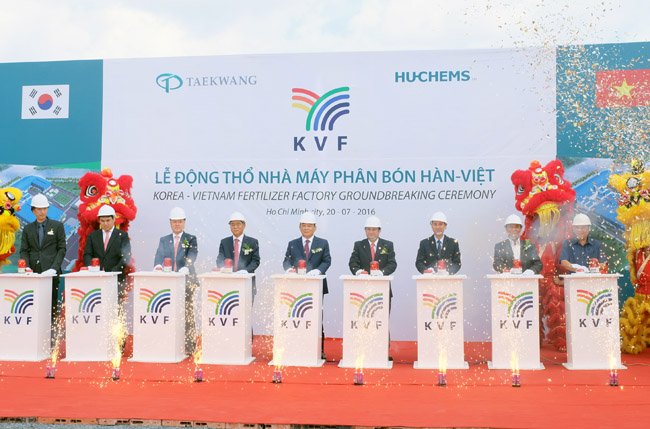 Taekwang Co., a large South Korean conglomerate, producing clothing, apparel, chemical, industry, and financial services products, which is also in the fertilizer business, announced a plan to build a composite fertilizer plant in the Hiep Phuoc Industrial Complex in Ho Chi Minh City, Vietnam. The company is about to construct a nitrogen, phosphorus and potassium (NPK) composite fertilizer plant with a yearly production capacity of 360,000 tons with an investment of US$ 60 million on land of 90,000 square meters. The plant will be built by SC Engineering in 15 months, whereby the factory is expected to begin its operations and production in the fall next year.

The Taekwang Group established operations in Vietnam in May this year with the purpose to join in the country’s fertilizer business. Taekwang and Hu-Chems, a leading chemical product manufacturer with headquarters in Seoul, have 51 percent and 49 percent stakes respectively in the joint-venture company that will operate the Hiep Phuoc Industrial Complex. While Hu-Chems is in charge of day-to-day running of the factory as well as managing the company, Taekwang Co. will focus on selling and marketing products using its local network based on its 22-year-long know-how in the Vietnamese market.

“The Taekwang Group has contributed to Vietnam’s economic development via the footwear business over the past 22 years,” Park Yeon-cha, Chairman of the Taekwang Group, commented and added that “from now on, we will make a contribution to the development of Vietnam’s agriculture by producing and distributing high-quality fertilizers.” Choi Kyu-seong, President of Hu-Chems, added that “when KVF Factory with an annual production capacity of 360,000 tons operates on a full scale beginning next year, the factory will produce 9 percent of Vietnam’s entire NPK fertilizer production”.