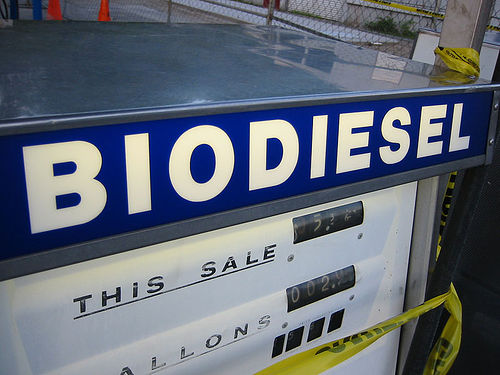 The rise of oil prices and the growing instability of most oil providers, as well as ever-increasing levels of greenhouse gas emissions, have pressured the EU into investing into research and production of biofuels. These are manufactured from organic compounds and can supplement or replace conventional fossil fuels. Three generations of biofuels have been developed thus far. First generation biofuels, or conventional biofuels, are currently commercially available on a large scale and their production is based on agricultural crops that could also be used as food crops. Included in this category are bioethanol and biodiesel, meaning that their production requires large harvesting areas that may compete with other types of land use. Second generation biofuels are generally based on non-food crops (such as wastes, residues, etc.). This category of biofuels is still at an early stage of commercialisation, meaning that large-scale availability will take time. Finally, third generation fossil fuels are derived from algae.

The first phase of the European Commission’s support for biofuels began in 2000, as the heavily oil dependent EU sought to preempt social and economic disruption in case oil supplies became constrained. For road transport, the Commission’s Green Paper proposed a 20 percent substitution of conventional fuels by alternatives such as biofuels, natural gas and hydrogen, whereby this is to be achieved by 2020. To attain 20 percent target set by Brussels, various kinds of tax incentives were also envisaged, which were designed to motivate the producers.

However, the disappointing results of this phase led the Commission to adopt in 2006 a new comprehensive strategy for developing the biofuels sector, which builds on and further expands its Biomass Action Plan introduced at the end of 2005, and also launches a plan designed to increase the use of biomass in the EU’s transport sector. By 2009, each Member State was tasked to ensure that the share of energy from renewable sources (thus not exclusively biofuels) in transport by 2020 is at least 10 percent of its total consumption of energy in the sector (excluding aviation), by which the Commission essentially created EU-wide criteria for sustainable production. Other legislation followed, for example Flightpath 2050, which seeks to reduce greenhouse gas emissions in aviation by 60 percent by 2018.

In 2012, in light of several studies that pointed to disadvantages of first generation biofuels with respect to the 10 percent target, the Commission proposed to reduce the share of biofuels in the transport sector to 5 percent by 2020 and this with a significant support of other additives coming from renewable sources. However, this proposal was not passed into law. Furthermore, the Transport, Telecommunications and Energy Council capped the share of first generation biofuels at 7 percent, while second generation biofuels were capped at only 0.5 percent of total transport energy consumption, though exceptions to this rule are possible.

Following this blurring of Commission proposals, it seems a third phase of EU legislation is afoot, characterised by wholesale scrapping of the current policy framework, leading to biofuel promotion at the EU level as a result of major political difficulties and pressure placed on the Commission from the ever more sceptical public and experts, as well as powerful lobby. No more 2020 targets are expected, nor are the incentives for the production of first generation biofuels likely to be extended. Nevertheless, research of biofuels is ongoing, and the transport industry seems to retain interest in this field. With a new Commission expected to take office shortly, we may yet see a change of political course on the issue.