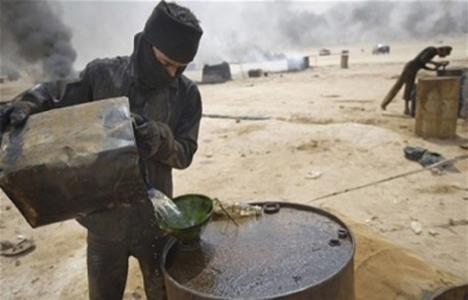 It is a widely acknowledged fact that oil trade is the main source of revenue for the Islamic State, also known as ISIS. In fact, the terrorist organization controls most of Syria’s oil fields. However, not much is known about how the economy of oil really works for the ISIS and how such a non-state actor can ensure extraction of the crude and subsequently market it. Not only is the way the entire production system works relatively unclear, it is also proving to be extremely difficult to disrupt it.

Most of ISIS-controlled oil comes from Syria’s eastern Deir Ezzor province, where output is somewhere between 34,000 and 40,000 barrels a day, based on local sources. ISIS also controls Qayyara field near Mosul in northern Iraq whose output is about 8,000 barrels per day. The Qayyara crude is a type of heavier oil and therefore it is often used on the local market to make asphalt. The price of oil sold by ISIS therefore depends mostly on its quality. The oil from the al-Omar field in Syria, for example, can cost even $45 per barrel while that from lower-quality fields might be sold for $25. Analysts estimate that ISIS might on average earn about $1.53 million a day.

However, unlike what many believe, the Islamic State does not make most of its revenue from exports. In fact, it profits heavily from oil trade with other rebel-held areas mostly along the border between Syria and Iraq. ISIS markets its oil directly to independent traders at the oil fields in a very organized manner. Syrian and Iraqi customers often have to wait for weeks in lines before it is their turn.

Traders generally have a few options after they buy ISIS crude. They can either sell it on to other traders who will take it further to the parts of ISIS’ self-proclaimed “caliphate” or they can take it to refineries, sell it there and line up to queue again. There is also another option: they can try their luck and sell crude on a local market. The most profitable option for most sellers is standing in lines, which could yield them a minimum of $10 per barrel.

In addition to these ISIS-controlled markets, there are also rebel markets, which attract two types of fuels – more expensive fuel refined in ISIS-controlled areas and cheaper, locally refined fuel. Locals mostly buy a mix of both. Pricier fuel is mostly kept for vehicles while the cheaper option is used in generators. On top of serving these two main markets, ISIS “serves” also the market in the neighboring countries. Many traders find smuggling profitable but this activity has been apparently on decline due to very low global oil prices. Smuggling is generally a very popular activity for Iraqis and Syrians with entrepreneurial spirit and most of it has gone through the opposition areas in the northwest.

All in all, despite some bits of knowledge of how the system works, it is generally difficult to make any estimation about a more precise number of oil productions in ISIS-controlled areas, though it is obvious that the output has declined since the territory was taken over by the militants. The ISIS is making great effort to recruit skilled workers that would be able to keep the money machine running, even though it does not have the necessary equipment and technology to maintain or modernize them. Nevertheless, despite the continuing dilapidation, the fields still keep supplying the terrorist group with the much-needed finance to run their operations and spread terror in the region and throughout the world.