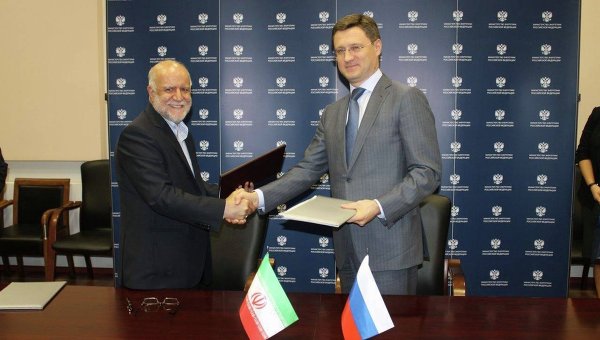 After several months of negotiations between heavily-sanctioned Russia and rouge Iran on possible cooperation in oil sector, the talks yielded a surprising outcome on 5 August when Kremlin announced it had agreed with Teheran to help market its oil but withdrew the statement shortly. Yesterday, Iranian energy minister Bijan Zanganeh and his Russian counterpart Alexander Novak signed a memorandum, anchoring their cooperation in oil sector for five years. Mr. Novak commented that “based on Iran’s proposal, we will participate in arranging shipments of crude oil, including to the Russian market.” Both parties failed to give any details about volumes or more precise contents but assured that their deal would not violate any international sanctions. Shortly after, Moscow withdrew the announcement saying they would issue a new statement today (7 August). Kremlin did not provide any reason for its withdrawal.

Since the beginning of this year, both countries have held talks on a swap of oil for goods worth 1.5 billion USD monthly, which would enable Teheran to increase oil exports considerably. For Russia, in contrast, it would mean at least partial mitigation of West-imposed sanctions. Under the suggested contract, Russia would purchase about 500,000 barrels a day, which is approximately 30 percent of Iran’s oil. In return, Iran would buy Russian goods and equipment. Both sides later admitted that such negotiations had been taking place but also acknowledged that it was difficult to come up with a contract satisfying both parties. Russia and Iran are major oil exporters but do not have sufficient infrastructure to be able to swap each other’s oil easily to help boost their sales. A mutual deal of similar kind would immensely help both economies at the time when Russia is battered by sanctions and Iran is still negotiating to curb its nuclear program with the international community. In Iran, international sanctions have decreased its oil exports from 2.5 million bpd to 1-1.5 million bpd in two years. Russia, being the second largest oil exporter in the world after Saudi Arabia, is dependent on energy exports for 50 percent of its budget revenues.