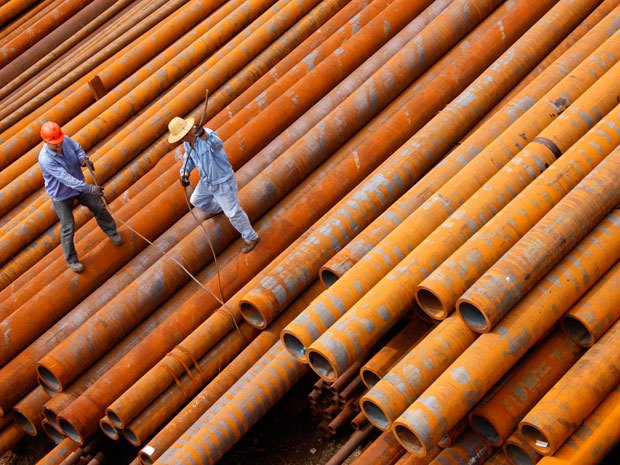 Whereas the United States is going through an extremely successful “shale period” which has prompted the country’s Energy Information Administration to enhance the oil output forecast for next year, China’s National Development and Reform Commission (NDRC) got their numbers also wrong but in a different direction. Two years ago, the NDRC predicted that China would produce between 60-100 billion cubic metres of shale gas in 2020, but the organization’s director recently admitted that in fact only 30 billion cubic metres would be feasible by 2020. This is currently one percent of China’s annual energy needs.

The volume of technically recoverable shale gas in China is estimated at 1.115 trillion cubic feet (about 31 trillion cubic metres) which makes China’s reserves the largest in the world. The desired increase in shale gas usage in China is in line with the country’s struggle to move away from coal, which now constitutes about 70 percent of energy consumption, in order to be more considerate to the environment. Despite the growing interest in unconventional energy sources, natural gas remains the only possible substitute for dirty coal, which certainly creates many business incentives to boost its output.

China is in fact trying very hard to catch up with the United States in gas production. In order to do so, Beijing does not hesitate to ignore the cost-benefit analysis which suggests that spending four times more than a U.S. company to develop the same type of shale-gas field is not a particularly efficient business strategy. The American shale gas strategy, which China has been copying and replicating, sometimes even with the help of the Americans themselves, is apparently not a one-fits-all approach. Geology does play a role. Almost 90 percent of China’s reserves are located in three basins – Sichuan, Tarim, and Yangtze Platform. Drilling in three places should – at least in theory – mean less problems with infrastructure, lower costs and simpler project management. Yet, unlike American reserves which are mostly located in easily accessible areas, China’s Sichuan province is for instance not only deeper but also agitated by seismic activity and deformations of rock formations.

Under such challenging geological setting, it is not surprising that China overspends on infrastructure and technology needed to develop shale gas projects. For example, Sinopec, China’s major state-run energy company, estimates that it will spend about 10 million USD on each well while in parts of the U.S., one well requires a budget of only 2.6 million USD. As such, decreasing costs of shale production is among the most important and most immediate steps that China needs to make in order to realistically maintain its position as America’s shale gas competitor. If successful, companies like Sinopec will be able to produce more gas and benefit from the economies of scale.

But even if the cost of fracturing was lower, the firms trying to operate in the Chinese gas industry would still have to face policy problems. China does not have an effective policy system to motivate investors to develop unconventional oil and gas resources. In particular, management of mining rights, market access threshold, and industry standards are still rather unknown despite the fact the shale gas has been classified by Chinese authorities as an independent mineral and was put under primary administration. In addition to these three major obstacles, China’s drilling troubles moreover stem from several other interconnected problems ranging from water management, through poor quality of pipelines, to shale operations in disputed regions and policy issues. In such an unfavourable environment, especially while the main shale gas competitor is thriving, the 400-billion-dollar deal between China and Russia has not come as a surprise. It turns out to be much easier and cheaper for Beijing to ask Russia to build new pipelines and send oil for the next 30 years rather than trying to tackle the difficult conditions back home.