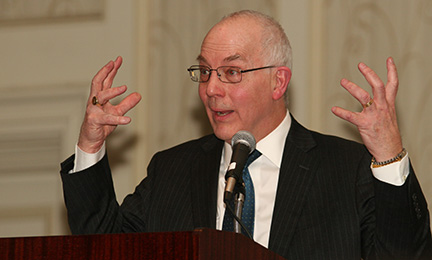 The U.S. government earlier this week (9 September) boosted its forecast for the next year’s oil production by a quarter of million barrels (bpd) per day thanks to the ongoing boom in shale oil drilling. The oil boom continues to baffle expectations of sluggish growth. The U.S. Energy Information Administration (EIA) now forecasts that domestic production will go up to 9.53 million bpd, rising by about 1 million bpd for a third consecutive year based on the latest monthly short-term outlook. A month ago the EIA forecasted that output growth would decrease in 2015 to 800,000 bpd.

The American shale success story has made it possible for producers to unlock reserves, thus bringing the United States closer to becoming the world’s largest oil producer, which would significantly eliminate the country’s dependence on imports. According to Adam Sieminski of EIA, increasing monthly crude oil output, which will be almost 10 million barrels a day next year, will help decrease U.S. fuel imports in 2015. Next year, imports should constitute only 21 percent of the country’s domestic demand, which will be the lowest level in almost half a century. The EIA also increased its forecast for this year’s U.S. output to 8.53 million bpd from the previous estimate of 8.46 million bpd.

Given these numbers, the U.S. is on track to count for approximately 91 percent of the 1.3 million bpd rise in global oil production in 2015. American oil production has changed its course in recent years thanks to the development of shale resources, which have helped increase output by more than 70 percent in six years. The average output was 8.6 million bpd last month having been the highest level since 1986. United States’ total consumption of petroleum and related products was believed to go down to 18.92 million bpd in 2014 year on year. In 2015, the total consumption is now forecasted to go up by 0.8 percent to 19.08 million bpd.